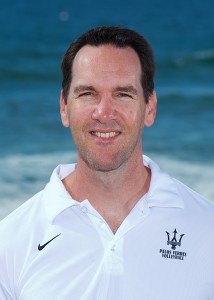 During Patrick’s tenure, the boys volleyball team has been a nationally ranked program, producing numerous players that have gone on to play Division I NCAA volleyball, 3 AVCA High School All Americans, 2004 and 2017 league champions, and 6 tournament championships. In addition, Patrick is the head coach of the girls volleyball program at PVHS.

The girl’s team is coming off their 3rd consecutive year of over 20 victories in a season as well as competing in CIF playoffs. In 2017 the girls reached the Division 2 quarterfinals and a school record of 26 wins in a season. In 2016 and 2018, the girls rose to the 2nd round of Division 2 CIF.

Patrick and his wife Beth have two girls, Lily age 14 and Ryan Marie age 9. Patrick is committed to building a legacy of Sea King volleyball that the Palos Verdes community can be proud of.