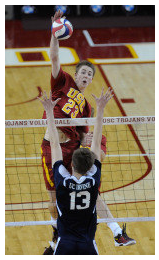 He had big performances against UC Irvine and Pepperdine.

USC’s Andy Benesh was named Off The Block Co-National Freshman of the Week for his performances versus UC Irvine and Pepperdine last week.

The 6-7 freshman middle blocker had a career-high 15 kills with no attack errors while hitting .789 in the Trojans’ 5-set victory over 2-time defending NCAA champion and No. 7 ranked UC Irvine on Jan. 14. He then added 9 kills while hitting .444 and had 4 blocks in a 4-set loss to No. 3 Pepperdine on Jan. 16.

It is the second time a Trojan has been named Off The Block National Freshman of the Week in 2014, following outside hitter Lucas Yoder’s honor the first week of the season.