Ryal Jagd, former Palos Verdes High School volleyball player, was a six-time letterwinner (four for volleyball and two for football). He was a three-time All-CIF honor, two-time All-Bay League First Team selection and twice earned All-Bay Area honors. Jagd was the PVHS volleyball MVP in 2006 and ’07 and was the team captain three years. He was also honored as the 2007 PBHS Senior Athlete of the Year for football and volleyball. Ryal went on to play volleyball for UCLA. Ryal is now coaching at CU. Check out his career at http://www.cubuffs.com/ViewArticle.dbml?DB_OEM_ID=600&ATCLID=205603718 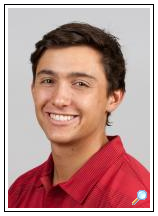 Two-time Bay League Libero of the Year while playing for Palos Verdes High School (Calif.) graduating in 2010. Grant was listed on Volleyball Magazine’s Fab 50 as one of the top seniors in the class of 2010. He was champion and MVP of the Bay League two-man beach volleyball tournament and played for the Southern California Volleyball Club in 2008 and 2010. Delgado won a Junior Olympic 17’s Open Division bronze medal while playing for the Riptides Volleyball Club in 2009. Grant listed his most memorable high school moment as taking Mira Costa (and Eric Mochalski) to five sets before losing 15-13 in the fifth.

Check out Grant’s career playing volleyball for Stanford at http://www.gostanford.com/ViewArticle.dbml?DB_OEM_ID=30600&ATCLID=208167645