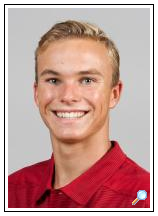 Cole Fiers graduated from Palos Verdes High School in 2013. He was considered one of the top setting recruits in the nation. Cole was a 2013 Volleyball Magazine/Mizuno second-team All-American, played for Southern California Volleyball Club and won two gold medals (2010, 2012) and tournament MVP honors (2012) at the U.S. Junior Olympic championships. He was named the Bay League’s Most Outstanding Player at Palos Verdes as a junior, and led the Sea Kings to a school-record 29 victories with 928 assists as a senior captain.

Read more about Cole and follow his Stanford volleyball career at http://www.gostanford.com/ViewArticle.dbml?ATCLID=208897763&DB_OEM_ID=30600